Interstellar travel is a matter of propagation through empty light-years at a speed well above that of light. The vast size of the galaxy still made for long, long periods of cramped discomfort. For most of any trip Larry Drover was wedged into a ship’s narrow cockpit, making sure that complex systems continued to operate. Either he was monitoring the expenditure of energy to build velocity, or he was watching the consumption of energy to reduce velocity, or he was simply waiting to change over from one mode to the other.

Larry found the quiet of the cockpit unnerving. Ordinarily he would be blasting music from the powerful speakers that he had added to the cockpit. Flight rules clearly barred passengers from the bridge or engineering areas. Whiting, however, climbed into the cockpit like she was authorized to fly. She had watched the pre-flight litany of call and response between Larry on the flight deck and Mo Lusc in engineering. Once they were away from Lyman, she promptly fell asleep. Larry assumed that the military had different flight rules and tried to ignore her.

The hours a pilot spent jammed in the cockpit could be pleasant idleness or vacant boredom. To prevent the dangers of boredom, Larry had spent time and money on hours of rare and obscure music. He had purchased whole libraries of compositions, performances and critiques. He also had computers for simulation, composition, analysis, and synthesis of music. He was an avid collector but not a musician; he absorbed relatively little of what he listened to.

The recordings produced by the entertainment industry were banal, nearly identical popular songs, intercut with canned banter and stock interviews with music personalities from another side of the galaxy. Larry found that odd and unusual recordings were far more entertaining than the undemanding commercial fare.

While Larry preferred to play the music through a set of speakers installed on the bridge of the Mule II, with Whiting dozing in the navigator’s jump seat, he thought it more polite to leave the music off. He was working his way through some ancient, low-resolution recordings of pre-spaceflight folk songs. He preferred to listen through the collection once, then listen to the various articles of analysis and criticism, then listen to referenced selections. This made the recordings sound fresh and unusual far longer. While most music criticism seemed to be vacant academic posturing, it was a mental break from the technical tedium of flight operations.

Larry had worked out a solution that would put him into a good orbit around the star that held the incomplete Henry base. The difficult and exacting work of bringing the ship onto that course had just begun.

The incongruity between the threat of attack and the calm announcement were not half as grating on Larry as the faulty procedures. Whoever set up the procedures at the Lyman base must have also written the orders for Henry.

“Can you just leave me out of this?” Larry shouted at his console. Getting shot at would make the trip unprofitable.

“Yell a little louder, that always helps,” Whiting said, clearly irritated at being waked by Larry’s outburst. She stretched and rubbed her eyes.

“Who plugged you in?” Larry asked.

“I was just having this great dream that I was being drowned by a pod of intelligent squids. And then I woke up in this nightmare,” she said.

“Next time, you can walk,” Larry replied.

Whiting stared at him, but didn’t say anything. Larry hunched down into the pilot’s chair and tried to get his ship back on course for Henry base. He’d taken his eyes off the instruments for too long, and they’d wandered away from the ideal orbital approach.

The intercom chimed on. Mo Lusc’s synthesized voice squawked feebly. The bandwidth of the intercom and the Cephalopod speech synthesizers were very badly matched. It took some experience to interpret the sounds.

“Can we land? Do we need military approach codes? Will they shoot if we don’t have the codes?” Mo’s questions were a badly garbled mess. Whiting scowled at the noise.

Larry switched on the intercom; “I’ll check with the gunslinger,” he said.

“What the hell was that?” she asked.

“It’s Mo Lusc. It wants to know if we need a military pass code to land at this base. It thinks they’ll shoot us.”

Larry looked defiantly at Whiting. She stared back, a scowl forming slowly.

“Patch me through,” she said suddenly, grabbing the navigator’s headset from the small cabinet overhead.

Whiting fussed with her hair to settle the headset properly. She put it on like a pilot, as if it were a hat or earring.

Larry switched her into the communication system. Mo Lusc’s speech synthesizer was connected directly to the external communication, and it sounded much clearer and far more impressive. Larry’s headset microphone was also modulated to remove the droning machine noise of the cockpit, and provide a slight reverberation, as though he was standing on a stage in an empty auditorium.

Mo Lusc continued talking, not knowing that Whiting was connected. “Should we trust a military officer? With external glands? Where is the rest of her uniform?”

Larry hunched over his controls, embarrassed at Mo’s rambling.

The base traffic controller came on the channel, his signal warbling and weak from the huge distance. “Again, approaching ship Mule Two, you will provide approach codes or you will be fired upon.”

Whiting answered immediately, “Bravo India Tango Echo.” Base traffic control paused for a moment, and then answered, “Mike Echo. Bay three has been prepped. Welcome to Henry Base, Lieutenant Colonel Whiting.” “And the hired help. Don’t forget us,” Larry said. What bothered Larry was the conflict between military’s depending on freighters and regarding them with casual contempt. Freighters were universally treated as potential spies or traitors.

“Ma’am, is everything under control?” the base traffic controller asked.

“I’ve got a civilian pilot who doesn’t know when to shut up,” she replied, leaning out of the navigator station to stare at Drover.

“Larry Drover, Pilot. I’ve got your factory right here.” He grabbed his crotch in the ages-old gesture of defiance.

Whiting sighed. Larry didn’t look, but he was sure she was staring at him with intent to intimidate.

The base traffic controller replied, “Pilot, can you stay off this channel? This is a restricted space.”

Larry smashed the communications control, cutting off base traffic control.

“Those arrogant sons of bitches! I drag their stinking factory through the dust cloud to this stinking hole of a planet and they tell me to keep off of a standard working channel?”

Whiting leaned out of the navigation seat to talk directly to Drover, pushing the microphone away from her mouth. “It’s the frontier.”

Drover sighed and slumped down in the pilot’s seat. There were Outer Rim military bases only a few days flight from here. These stars were more properly Cephalopod territory. It was a complex, shifting frontier, made dangerous by the parallel escalations of commerce and military might.

Whiting leaned back in her seat. She opened the communication channel and said “Over and out.”

Both the Core Planets and the Outer Rim used the euphemism “trading mission” to describe their encroachment on the Ceph stars. As the trading mission blossomed, it required more elaborate supply lines. Then the government would find it necessary to protect the traders against piracy by the Cephalopods. This would lead to active combat in an effort to “pacify” the Cephalopods.

Drover leaned out of the pilot’s seat to look directly at Whiting. “They’re just star systems and planets. Not much different from the systems in the Core.”

She leaned over from the navigator’s seat. “These are undeveloped planets.” “Undeveloped by us. Mo Lusc is from this cluster,” Larry said, sneering on the ‘undeveloped.’ “These are settled home worlds to them.” “Things change. Anything could happen out here,” she said, clearly working through a standard list of cautions she used with every pilot and subordinate in the military. She said it without real enthusiasm.

Larry looked at Whiting. She looked like she was in pain. He assumed that she was uncomfortable with the subject.

“Yes, ma’am,” he said. “Party line coming through loud and clear. Adapt or die.” Larry slumped back into the pilot’s chair to begin preparing to land the cargo bays. He pulled out his personal computer, located the appropriate checklist and began the ritualized call and response. Surface imaging showed that the planet was relatively advanced, with plant life growing on the land. Life here had advanced beyond the various types of slimes and bacteria that covered almost all inhabitable planets.

Since so few planets had any kind of life, the usual rule was to build surface bases where possible and orbiting bases where the surface was inhospitable. The very rare presence of advanced surface animals did not always stop surface bases from being built; habitat destruction would ensure a base’s safety against all but the most intelligent, determined and dangerous animals.

This planet’s surface included folded mountains and deep valleys; gouged by glacial erosion near the poles, and filled with meandering rivers near the equator, the surface showed an advanced climate cycle. The cargo landing site was at the southern end of a narrow lake midway between equator and pole, perhaps 300 kilometers from the nearest ocean, assuring mild weather.

Landing the first of the cargo bays was always a challenge. It was almost impossible to ignore the scenery on a new planet. As a cargo bay dropped, the base’s structures grew into visibility. From discolorations at the end of the lake, the smoke plumes from the various combustion-based power plants emerged. Then the pits from mining operations and the vast agriculture domes began to appear.
Closer to the surface the denser atmosphere made the bays more difficult to fly. Larry could resolve medium-sized structures like the landing fields. The beacons were marked clearly on the control displays, but visual confirmation was an important step in the litany of landing. Once these medium-scaled details were visible, the small-scale detail showed up in a rapid sequence. The dormitory buildings and various factories became visible; then the machines moving about on the surface to tend the space craft.

Larry guessed that the surface weather must be benign. The structures were open, with visible surface transport vehicles instead of tubes. The atmospheric pressures and gravity were endurable, but the gas mixture had too much oxygen to support surface animal life. It did, however, support abundant, primitive plant life, making it a very pretty planet.

Once the sight-seeing was over, the second cargo bay was much easier to land. As he stepped through the litany of landing, Larry began to wonder why they were spending so much time and effort creating a planet-side base that would only be abandoned when the attack on the Outer Rim was complete.
Posted by S.Lott at 8:00 AM 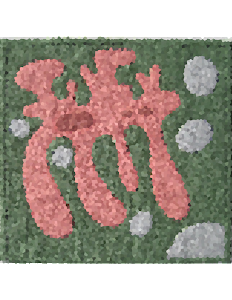